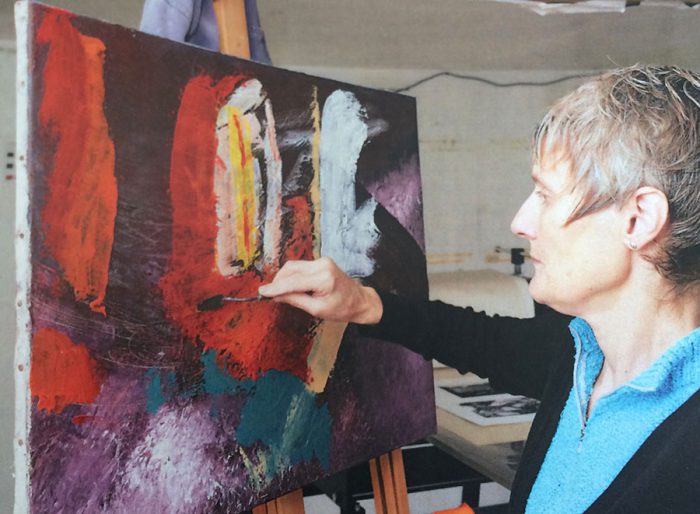 The artist Kay Barker has been practising for over 20 years exhibiting throughout Britain and abroad. Her work has been purchased by private and public collections. She is a prize winner in printmaking.

The Creasey Collection of Contemporary Art purchased Kay’s painting ‘Dripstone’ while she was studying art at Portsmouth University. Her first solo exhibition took place in 1989 at the Art Centre Gallery.

In 1990 Kay’s work took her to London where she concentrated on drawing and printmaking, taking courses in lithography, screen printing and etching at Central St Martins and the London College of Printing. Kay worked closely with schools and colleges giving workshops and lectures.

In 1993 her artistic career expanded when she moved to France. Here Kay produced six exhibitions over three years. Winning a prize for printmaking. In 1993 she became a member of Estampes Atelier a group of French printmakers with whom she exhibited. Whilst in France Kay worked as an art lecturer.

In the spring of 1995 she returned to London. Here Kay created small-scale monoprints and etchings. Estampes Atelier commissioned an edition of etchings. Kay’s work was selected for The Curwen Gallery, R.B.A and National Open Print Exhibition in London.

In 1999 together with seven other artists Callowland Independent Artists was formed. It was here that Kay developed and produced a new body of work using collagraphs and woodcuts experimenting with texture and scale.

During 2000 – 2005 Kay had some eight exhibitions including four solo shows. Working with Callowland Independent Artists provided her with new challenges, support and collaboration on a variety of projects. Her work focused predominately on the landscape.

In 2009 she relocated from Hertfordshire to Norfolk and was soon invited to exhibit as part of a group show at Hatfield Hines Gallery, Holt.

Kay’s most recent project has been to form The Studio where she produces her own work using traditional and contemporary methods.